Foster the People's "Supermodel" Mural in #DTLA Gets Pwned

By its very nature, street art, and mural art is impermanent so my efforts in documenting it with immersive panoramic technology help to preserve the fact that a piece even existed.

Case in point: earlier this year I posted this panorama of the epic Foster the People "Supermodel" mural that was painted across the side of a historic building in Downtown L.A. Yesterday, August 5, 2014, the Los Angeles Times reported that it was removed despite efforts by Mayor Eric Garcetti to intervene.

The enormous mural spanned seven stories and measured 125' by 150' over the side of the Santa Fe Lofts building at 539 South Los Angeles St.

It was considered one of the largest in the on the West Coast. The mural was executed by the Young & Sick collective that also created the cover art for Foster The People's first album, 'Torches.'

When word first got out that Capital Foresight, the building’s owner, was planning to paint over the design, the band called for fans to sign a petition that would keep the mural up. Nearly 12,000 people endorsed the petition on Change.org.

LA Times reporter David Ng wrote, "A recently released joint statement from the band, Garcetti's office, and the building's owner said that the Santa Fe Lofts is a designated state historic building and, therefore, receives tax credits for maintaining original design features. It is "necessary to remove the mural to return this historic property to its original state."

The mural also never received a permit from the city’s Department of Cultural Affairs, which heads the city’s mural permit program.

The City Council last year lifted a ban on murals painted on privately owned commercial and multifamily residential buildings and instituted a process for issuing permits to mural projects. 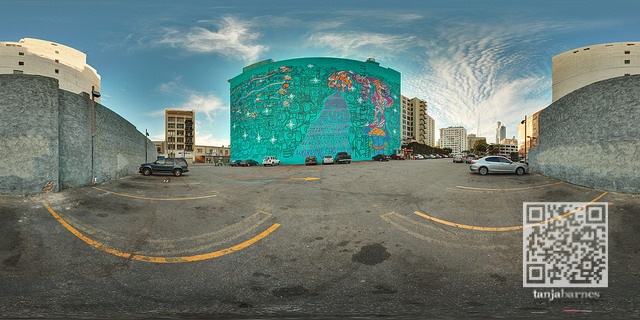